Toleza sponsors a local intra village football and netball league in what might broadly be called the Sawali area. Some 20 villages compete and at the Annual finals the Toleza cups are awarded to the winners. Take a look at the events from our 2010 Sports Day.

Toleza in conjunction with schools in the Sawali area sponsor and organise an athletics day with running, relay, cross-country races, high and long jump, three-legged races and tug-of-war. This is one of the most popular events in the local calendar and last year attracted more than 600 spectators.

Over a number of months each year, the primary schools around the farm play in leagues against each other. This culminates in July/August with a finals between the two strongest teams at the football field at Toleza.

Contact us for more details or suggestions for our community projects. 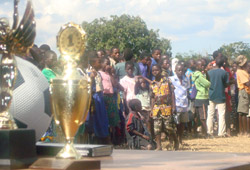